Daniel’s Vision of The Ram and The Goat

From chapter 8 to the end of Daniel, the text is written in Hebrew.

Just like in the dream of the four beasts, the vision on a ram and a goat in this chapter is explained in the same chapter.

The ram with two horns is Media and Persia, with the higher horn being the stronger Persian. The goat is Greece. The prominent horn is Alexander the Great. The book of Daniel was written at lease 200 years before Greece came into power on the world stage. Only God could prophesy the future, and this is the assurance of the authority of the bible as words of God.

God has already prophesied through Isaiah two centuries ago regarding Cyrus, the King of Persian would came in power to conquer Babylon. (Isa 41:2, 25; 44:28-45:4) 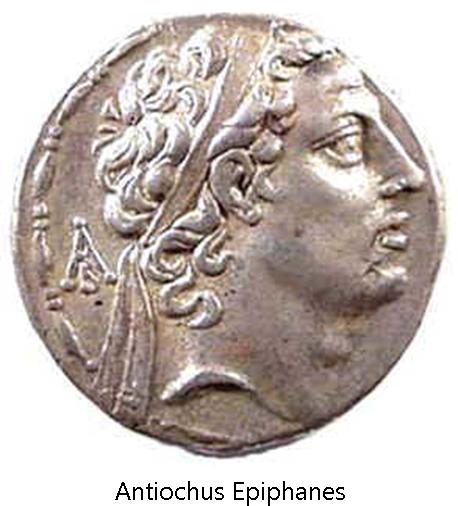 The little horn (v9) appears who becomes a great leader is Antiochus Ephiphanes, the ruler of Syria from 175 BC to 163 BC. He was known as one of the cruelest tyrants in the history.

Antiochus is a foreshadow of antichrist. What he did to the Jews will be repeated by the antichrist to the Jews during the great tribulation.

In 168 BC, Antiochus sent 20,000 men under Apollonius to level Jerusalem. They entered the city on Sabbath , killed most men, and took the women and children as slaves. The remaining men fled to the army of the Jewish leader Judas Maccabeus.

Antiochus prohibited the Jews from observing the Sabbath, practicing circumcision, and obeying the levitical dietary laws. On 168 BC, he replaced the Jewish altar with an altar of Zeus and sacrificed a pig on it.

Judas Maccabeus eventually conquered Jerusalem and the Jewish worship in the temple was restored. The event was celebrated as “The Feast of Dedication” (John 10:22) or better known as Hanukkah.

Antiochus went mad while in Persia where he died at 163 BC.

Angel Gabriel told Daniel about what will happen later in the “time of wrath”, at “the time of the end”(8:19). The remaining of the chapter focused on prophesy at end time, which the OT called this period “the time of Jacob’s trouble” and “the day of the Lord”. It is the period when God’s wrath would be poured out on an evil world.

The “stern-faced king (v23) is referring to Antichrist. He will become very strong (v24), by the power of Satan (v24). He will cause astounding devastation and will succeed in whatever he does. He will destroyed the mighty men and the holy people. I think the holy people means both Jews and Christians. He will take his stand against “The Price of princes”, our Lord Jesus Christ.

But at the end, the antichrist will be destroyed, not by human power (v25), but by the power of Christ.

Daniel is told to seal up the vision (v26). The meaning of all of this will be revealed by the revelation of Jesus Christ is revealed to apostle John. “Do not seal up the words of the prophecy of this book, because the time is near” (Revelation 22:10). The sealed books are the seven seals which will be reveal to John in the book of Revelation.

The Greek Language and Roman’s Roads

The Greece and Roman were under the sovereign plan of God. God used the Greece to union the eastern Europe and middle east with the common writing to prepare for the use of Greek in New Testament. Greek was the NT language because it was the common language during Jesus time. God used the Roman to build roads throughout the Roman empire. The roads systems became the road travelled by Jesus’s disciples to spread the gospel.